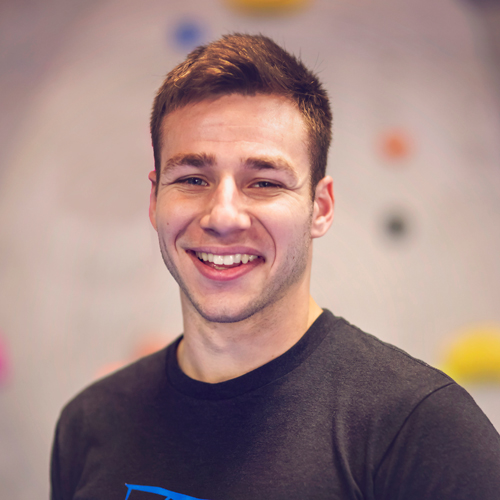 Caleb has turned his passion into his vocation.  He has become known in the Ninja community as one of the top course designers in the nation, and he is responsible for leading the team and great customer experience for which Rock Solid Warrior has become known.

Caleb first worked at a gym when he was 17, doing whatever he was asked to do while studying to be a personal trainer. He added to his own training by studying and training others. He continuously studies, designs, and builds obstacles and courses.  He started with his own “front yard” rig, created the amazing Mobile Ninja Warrior rig that had been used at public events and by some professional Ninjas for their own events.  It is now housed at Nick’s Flippin Kids in Clayton where we’ve started our Rock Solid Ninja Kids program.  He’s designed our Rock Solid Ninja Rigs packages for your backyard.  In addition to helping others around the country with occasional designs, Caleb is currently working on the design of our Holly Springs/Apex facility targeted to open at the end of 2021.

In Ninja Warrior competition circles, Caleb is known as “The Ninja of the Auer”. In addition to competing and often winning or placing in local competitions, Caleb made it to the World Finals of the National Ninja League and has appeared on Season 11 (2019) of American Ninja Warrior. In his rookie season on the show, Caleb qualified at the Atlanta City Qualifiers, and then turned in an amazing run at the Atlanta City Finals, and fell just short of finishing stage 1 at the Season Finals in Las Vegas.  In 2021, he’ll be on the “Fit Families” American Ninja Warrior special as a team with his wife (Hannah) and brother (Josh).

In addition to his long record of athletic accomplishments and training experience, he has a degree in Business Administration and a certificate in Criminal Justice. While being trained as a Police Explorer at the Fuquay Police Department, he competed at Winterfest in Gatlinburg with Explorers from many states, gaining a bronze and silver medal in “Physical Fitness and Tactics”, before deciding to take another career path. However, he gained much respect for those who serve in the Police and Fire Departments, EMS, and military.